So last night was my first burlesque show, and how did it go? Well, I ended up doing the full Monty! They always say the first show is the hardest, and…let’s back up and start at the beginning.

I have severe anxiety, and when I say severe,  I mean I’m on three medications to make myself get out of the house.  I’ve had friends come to my house and literally drag me out of it.  So deciding to sign up for burliest in December 2019 was HUGE, and then meeting Paige of Little Lioness Productions kept me from quitting.  I met her the night my former instructor humiliated me at the graduation performance of another school, criticizing me on everything from taking a couple notes about things I liked that I saw to saying if I was doing burlesque for myself, then “burlesque isn’t for you.”  And it gets more crushing.  Even before then, he criticized me enough that others in the class asked me what was going on, and one of the others almost quit because she was so uncomfortable with how much Chris was going at me.  But I need Paige the night he shredded me, on front of some of my classmates no less, and she really ended up making all the difference.

Paige has been nothing but the most encouraging, sweet person you can imagine, and the Little Lioness family…my partner said that I hadn’t really smiled much over the last year until I started kittening at shows.  The people there are just so kind and sweet, and it’s like a different world.  But that doesn’t mean I wasn’t nervous as hell.

I got there a little early last night so I could calm myself, have a bit of rum to help calm my nerves.  The more nervous I am, the more I will talk basically as a way of distracting myself from my nerves.  So I’m sure I talked a few ears off.  But if I annoyed anyone, they didn’t let on, and believe me, that helps calm nerves a bit.  But still, I had a small costume snafu backstage that was a harbinger of things to come.  The back of my C-string came loose, but I thought we got it takes back on me enough to be all right.

There was a point where I was wishing that Witch Prince was there.  Witch Prince wasn’t in the show, but they and Kitten A Round are two comfort people to me.  They’ve been at almost every show I’ve been at, and so are calming presences to me.  But then, like a fairy Godmother, Witch ended up being there!  They were the show kitten.  And what’s so cool is that the second show I was at Witch Prince was doing Fairy Godmother from Brandy’s Cinderella. 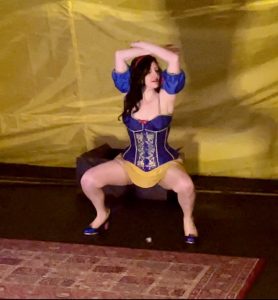 When my song started, I almost bolted backstage.  I can’t even begin to express how close I was.  The only thing that kept me from turning and running was that I didn’t want to disappoint the people who’d spent so much time and energy trying to help me feel better.  Without them, I wouldn’t have been able to do it.  I’m not kidding at all.  So I managed to start a few bars later than intended, but it was fine.  I’d practiced at home with my partner in a different spot than he ended up being, but it worked fine.  I gave him my cloak when I initially planned to start my dance, but since that part was slow enough to allow for errors or nerves (built in on purpose), it wasn’t an issue.  What was was the tarp overhead that was low enough to touch my head.  My hand was supposed to be straight above me.  So in my first show, I was having to try to modify some things because I couldn’t reach overhead, and two of my favorite things were going to have my hands overhead, including the end of the first verse. 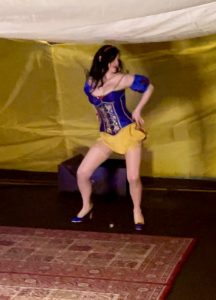 I was going to stop on eat foot, straighten my legs like at attention, and arms overhead crossed at the wrists to suggest bondage and being tied up.  Um…I couldn’t stand straight without hitting the tarp.  So right off, I had to change a few things.  But it was okay, right?  Right.  I did do a lot of what I do when nervous, though, which is cast my eyes downward.  I had to build up the guts to look audience members directly in the eyes for a few parts, and the first person just wasn’t having it.  Ouch.  He looked bored and like it was taking willpower not to give me an eye-roll.  Kind of a bash to the already-non-existent confidence at that point.  But the next person played along.  She was totally cool and I liked her.  The third person too.  She was sweet and acted flirty back.  Due to the stage set-up, she ended up also being the fourth person I planned to spot.  At one point the tarp overhead and a wrinkle in the carpet tripped me up a bit, so I took a couple stumbly steps, but didn’t fall.  Just got thrown off.  And I’m dealing with this stuff while dealing with tremendous nerves. 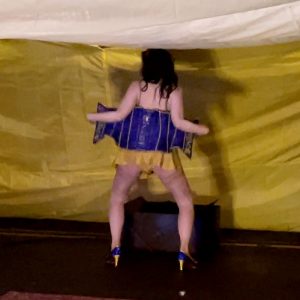 But at least my corset came off a lot easier than I hoped.  I didn’t build a zipper into it, or any sort of fail-safe.  A properly made corset that truly fits your body can be taken off using just the busk, without unlacing.  It’s generally not recommended to do this because most corsets aren’t custom made to fit the wearer perfectly.  But I digress.  This is the ONE costume concern I had—what if a hook got caught?  But no, no issue. 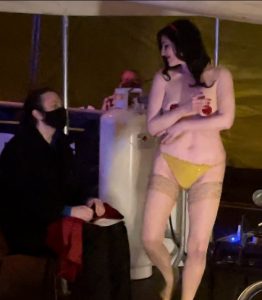 Now Cody was supposed to do something with his hands when I was grinding on him, and him NOT doing that threw me for a loop for a moment and forced me to have to improvise.  He told me later that he didn’t because his hands were so icy that he thought it would shock me, and yeah, he’s right, it probably would have shocked me.  I get cold very easily.

So the last part.  The panty I was wearing was supposed to unhook from the sides and the back fall to make it look like I had nothing under, but I had the apple c-string.  I was going to let the front drop to reveal the apple.  Except…the apple went with the panty.

And my hands flew together over my crotch, and my first thought was, “Damn, the tape’s still on me!”

And my second thought was, “At least I shaved!”  Any my third thought was, “I’m so glad I changed out my pink piercing for red since it still matches the theme!”

And my fourth thought was, “I’ve got to call Jeremiah and tell him about this!”

And my fifth thought was “Fuck it,” and threw my hands out to the side and shrugged while laughing.  It was at the end anyway, and I was supposed to walk off in a sexy manner, but that wasn’t happening.  I walked off laughing.  Which some might call sexier than any walk, but which I call amusing because OMG that nightmare-scenario most people have happened my first show!

I kept apologizing profusely to Paige even though I know she knows that things happen in live theater.  I was partly amused, and partly ,ore amused.  But also, even though anyone who watches a lot of live performances of any sort know that “shit happens” is part of the fun.  You watch a movie and it’s been recorded a thousand times to get it perfect, but what happens on stage happens only for that crowd.  I’ve seen the Sugar Plum fairy be dropped.  I’ve seen Juliet flub some steps.  I’ve seen Elphaba completely miss some notes.  Professionals.  People whose full-time job is that.  So of course people who aren’t paid to dedicate 40+ hours a week will do the same.  Especially a new person.  I just have high expectations of myself, but oh well.  Shit happens. 😀

So almost nothing went according to plan, but in a way, that’s better.  If you can survive your first show, you can survive your second, and if you can survive all the things going wrong, then you don’t worry about them happening again because you’ve already been there, done that.  I can tell you, for sure, that if I can get into another show, which I will try to do, I won’t be nervous.  All those “But what if’s” already happened, and I have the experience of surviving it.